How to solve conflicts in a multicultural workplace

Recently I have had many clients who are not satisfied with their job and are thinking of changing it. When we get to the core of the problem, however, it often turns out that it’s not the content of the job that is less appealing, but there is an unresolved conflict with one of their colleagues or, worse, their boss.

As a result, they have felt stressed, were less motivated in their job and some were even confronted with depression. What often comes across to me is the fact that a multicultural working environment can frequently be a source of misunderstanding and conflict.

When we dove together into the core of the problem, we saw that although these conflicts manifest themselves primarily on the surface, in an unwanted behaviour, their roots lie much deeper.

“Anna” has a conflict with her team member “Kate.” Kate and Anna are working together on a project where they both depend on each other’s work. Anna has delivered her part too late, as she was working out the final details.

Kate was very unhappy with this, as it meant that she had to delay starting with her part and thus the whole project could be delayed, which could influence her promotion. She told Anna that she was very angry with her and should the lateness continue, she would ask the manager to replace her with someone else.

Anna was hurt, but she did not say anything and when they went back to work, Anna started avoiding Kate. Whenever Kate asked her to go for lunch, she said that she preferred to eat at her desk and catch up on work. That obviously did not help the project either…

So what happened? I will use the Iceberg model to explain. 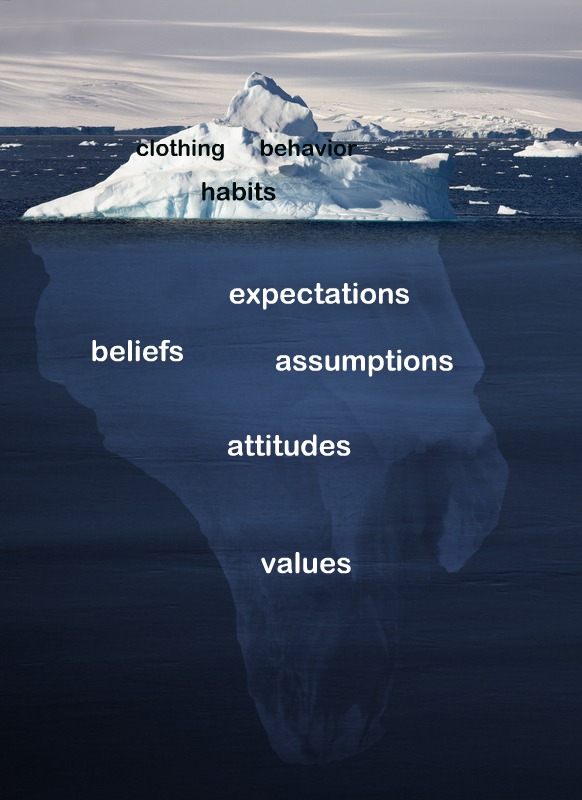 ›  What we see

Visible above the water line are the actions and words of both women. This is the part that we see and experience when talking to a person. We hear the voice and the content; we see the gestures, etc.

What we do not see is what these actions are based on; what lies beneath the water line. This is where we keep our values, beliefs and assumptions. The interesting thing is that what is visible is always influenced by what is invisible.

Essentially, when we talk about a conflict between two people, it is almost certain that their values are also in conflict. Once you are aware of this, you will be able to tune in to this part of each person, while forming a connection that is deeper and therefore more solid.

Let’s take a look at both Anna’s and Kate’s values and how these values influence their behaviour.

Anna’s “quality” value means she works until she is satisfied with the quality of her part of the project, even if it is then late. Her “harmony” value means she does not share her emotions when feeling hurt, as in her view direct confrontations are disrespectful and damage the harmony of the team.

On the other side we have Kate and her values “honesty,” “respect” and “success.” She honestly and directly communicates her feelings to Anna, as she is worried that the delay will harm her success.

We can clearly see in this example how the values of honesty and harmony may clash. We also see that both women have “respect” as a common value, although each one’s interpretation of this value is completely different.

While Anna believes that respecting someone means being polite and not being confrontational, Kate believes that in order to show respect you need to be honest.

The crucial question is, of course, how can both women solve their conflict and learn to communicate differently so that they understand each other and work better as a team?

In order to work successfully with people from different cultures, we need to learn to identify our values and those of other people. Once we understand that, we can learn how to build the bridges that will help us to communicate more effectively.

› Anna could have explained why she was late with her part of the project by clarifying how important quality is for her.

› Kate could have explained that as she cares about the timeliness and success of the project, she became nervous when things were delayed.

› Anna could have explained that she felt attacked and disrespected.

› Kate could have expressed her dissatisfaction in a different way.

› Both women could have had a more open conversation designed to bring about an understanding each other’s values and points of view.

› In order to work successfully in the future, both women could search for a common value.

Surely the success of the project is equally important for both of them. They could build their relationship based on a shared value and look for workable solutions to bridge the differences.

Have you experienced similar situations in your workplace? Share your stories below!

Photo by Sagar Dani on Unsplash

About the Author: Dorota

We use cookies on our website to give you the most relevant experience by remembering your preferences and repeat visits. By clicking “Accept”, you consent to the use of ALL the cookies.
Cookie settingsACCEPT
Manage consent

Any cookies that may not be particularly necessary for the website to function and is used specifically to collect user personal data via analytics, ads, other embedded contents are termed as non-necessary cookies. It is mandatory to procure user consent prior to running these cookies on your website.